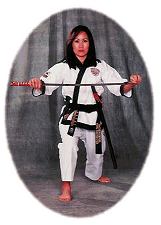 In truth, I did not find Ashtanga Yoga - yoga found me at the perfect time. The important thing is that I responded.

From early childhood, I have found joy and satisfaction in physical activity. One of my earliest memories is ice skating on the Hahn River in Korea with my father. The fact that I got frostbite on my pinky toes from it does not dim my fondness for the experience. As I moved into my teenage years, I experimented with a variety of activities, some were more fulfilling than others. At first aerobics was fun, but the repetition became boring. I have skied for over 35 years in Pennsylvania, Colorado and Europe. I have golfed for about 15 years, at least a few times a week. Later, I studied the form of Korean Martial Arts, Tang Soo- Do. Here I learned much about myself. I am extremely self-motivated, have a great intensity of focus and a desire to explore the limits of my personal power. I earned a Second Degree Black Belt.

Then in September 2004, with no warning, my life changed forever. I was given a one-month free pass to a yoga class at a local hospital. After only three classes, I knew that I wanted to become a yoga instructor. I began to seek opportunities to learn more about yoga. It is a bit ironic that the modern tool of the Internet opened up the vast world of the centuries-old yogic path. One day while searching online, I saw a man named Sharath doing a jump-through from vinyasa. That is the moment that yoga found me. I knew that I would one day practice that kind of yoga.

In January 2005, although a complete novice, I did not hesitate to travel to Mysore, India, the epicenter of Ashtanga Yoga, and the home of the Pattabhi Jois Yoga School, which recommended a three-month program. When I arrived, to my dismay I discovered that the school was closed for nine days for an Indian Holiday. I would not be deterred. I had not traveled half-way around the world to just sit in my room and wait. So, I searched Mysore, seeking another Ashtanga school where I began taking private classes, practicing Ashtanga yoga three times a day. I look back now and wonder, “What madness possessed me then?” Fortunately, I was in good health, having practiced Karate twice a day prior to my trip to India. This, combined with my active lifestyle, allowed me to avoid injury. That first year in Mysore, India, I never got to Pattabhi Jois' school. However, the following year, 2006, I made sure that I went to Pattabhi Jois’ school, and have returned to Mysore every year since.

On subsequent trips to Mysore, I was intent on learning all that I could about yoga from a variety of teachers. As in life, there are many paths, and I am fortunate to have 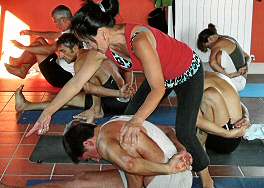 had marvelous teachers. However, my true yogic path continues at Pattabhi Jois’ school. Since 2008 I have traveled there every year for a two-month stay, each time delving deeper into my yoga practice. Following his death in 2009 at the age of 94, Pattabhi Jois’ grandson Sharath carries on the great tradition of his Ashtanga yoga legacy. (Teaching Ashtanga Yoga in Bologna, Italy.)

On January 11, 2011, Sharath blessed me with an Authorization to Teach Ashtanga yoga. On January 2013, Sharath asked me to assist him teaching for a month. Yes, I got to wear that famous towel around my waist in the Main Shala. In 2014 he had a special, two-month long course for authorized teachers only and I was invited! What an honor! Since 2007, I exclusively practice with Sharath as my teacher. My practice has deepened; my body responds. Six days a week, I practice for approximately two hours a day. Yes, it is demanding, sweat-pouring hard work, and I love it. In fact, 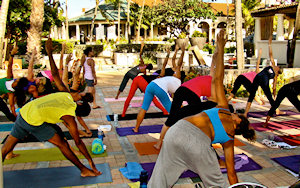 I look forward to the next day’s practice. I can both see and feel how my health and vitality continue to improve. Yoga has found me, and I am eternally grateful that I opened the door to this wondrous opportunity. I look forward to continuing my yearly studies in Mysore with my Guru Sharath, for “Where would my life be today without the bottom of my Guru’s feet?” And now, I have the privilege of sharing my knowledge and practice with my students who, if they choose, may follow their own yoga path.
(Teaching Ashtanga Yoga in Tierra del Sol, Aruba.)

Return to Top of Page