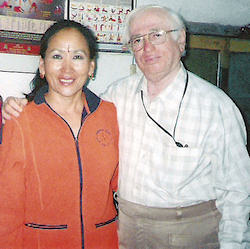 Pavanamukasana is an ancient Eastern form of manipulative medicine originating in India well over a thousand years ago. Upon first seeing a practitioner of pavanamukasana treating patients, many remark upon the similarities to massage or modern chiropractic medicine.

Pavanamukasana, however, when examined more closely proves itself to be a much more holistic treatment. Unlike chiropractors who limit their attention merely to the bones, practitioners of pavanamukasana also focus on managing problems with the body’s joints and muscles.

Moreover, the goal of pavanamukasana treatment involves more than simply correcting acute pains or even chronic conditions – though it does an admirable job with both. Pavanamukasana teaches practitioners the importance of preventive therapy, and bringing one’s body and muscles into a more natural alignment. In some ways, pavanamukasana can be seen as a sort of passive yoga, where the practitioner manipulates the patient to achieve greater flexibility, reduce pain, and produce the same sense of physical well being and relaxation experienced by yoga masters.

Son Hui Yi spent four years studying pavanamukasana manipulative medicine in India, as an apprentice to Dr. Narasimhan, a respected physiotherapist as well as master yoga instructor. She studied human anatomy, before proceeding to a more clinical study of the body. She learned how to treat numerous conditions ranging from spinal disorders to arthritis to vertigo and even headaches.

Today, Son Hui is the sole licensed practitioner of pavanamukasana manipulative medicine in the United States. She practices year round, treating many patients from children to the very elderly. Once a year, Son Hui travels back to Mysore, India where she first learned pavanamukasana to further hone her skills and acquire new ones. When not treating patients, Son Hui, like Dr. Narasimhan before her, teaches the art of Ashtanga Yoga to students from here in Johnstown, PA to others as far away as Washington, DC.

Return to Top of Page